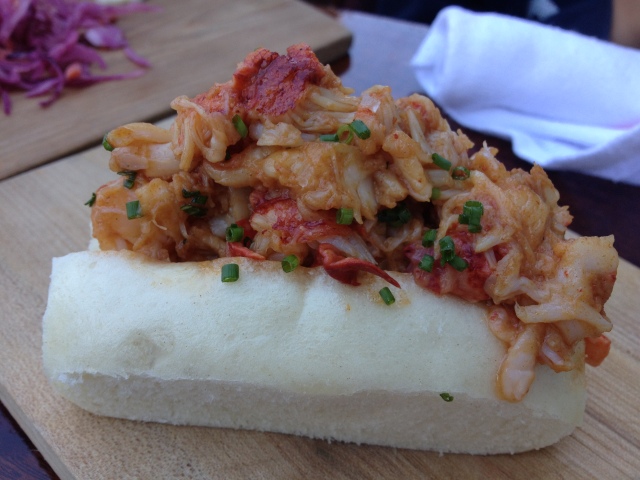 When I was growing up, fancy meals were the stuff of wedding Chinese banquets–or rather, Chinese-American versions of the ten course meals complete with a large platter of lobster with scallion and ginger at the end. (Please don’t ask me why Vietnamese families, with a strong anti-Chinese bent, still celebrate momentous occasions with ten course Chinese banquets! I simply do not know.) I think the Vietnamese element of these feasts was the addition of big bottles of cognac (VSOP Hennessy), but I might be mistaken. At any rate, these banquets were the staple of my fine dining experience. I particularly enjoyed the shark fin soup, whole steamed flounder, and platter of cold appetizers, which always included my favorite: jelly fish. But I never cared for the walnut shrimp, which had a yucky mayonnaise dipping sauce, or the red bean soup.

How different things are now for Soup-er Boy and Girl. They’ve been exposed to more fine dining in their short lifetimes then I during my first 18 years. Most recently, we spent a weekend in Portland, ME, where we took them to a number of fantastic restaurants–and not always with stellar results. First up was Pai Men Miyake, a ramen and yakitori joint from the folks behind Miyake. After a long (and trafficky) drive up from Boston, they were hungry and tired but managed to behave well enough to down some dumplings, kalbi yakitori and ramen. Their parents thoroughly enjoyed the lobster ceviche, pan seared pork buns, black tsuke ramen (dipped in squid ink) and seafood ramen.

Next up was Eventide, a new seafood restaurant with an impressive list of fresh oysters and other offerings from the sea. We had high hopes of cooperation from the kids with outside seating and fried cod on the menu. Alas, it was not to be. While their parents savored the briniest oysters from Maine and the amazing brown butter lobstah rolls, the kids picked at the chicken sandwich and fluffy fried cod. Seriously, that cod was beyond heavenly and we had to make them eat it. Ugh.

The main (ha!) purpose of this getaway was to celebrate Mr. No Nom’s birthday and Father’s Day, so we had made reservations at Fore Street. We couldn’t go to Portland and not eat at Fore Street, children or no children. We had an early reservation to make sure that Soup-er Girl wouldn’t have any late evening meltdowns. To my surprise, the server even mentioned kids entrees–pasta, roast chicken, and roasted pork loin. I probably would’ve chosen the pork loin for the kids to share but they insisted on pasta, which Soup-er Boy spent the meal poking at and Soup-er Girl would intermittently spit out. Sigh. Really? Here we were in a fabulous restaurant with amazingly fresh and seasonal ingredients and she’s spitting out the linguine?! Argh. Luckily, that was extent of their shenanigans and they were otherwise well-behaved enough (especially for dessert) for us to enjoy some delicious food. I was particularly fond of the whole roasted black snapper stuffed with hen of the woods and shiitake mushrooms–the most rich and perfect fish dish I’ve had in a long time. We were so stuffed that we vowed to fast the next day.

The fast only lasted 16 hours as we looked at each other and decided that we couldn’t be just blocks from Duckfat without making a stop. Given the lunchtime crowd and the smallness of the space, we were seated at a table with high stools, but fortunately they supplied us with a clip-on high chair for Soup-er Girl. Unfortunately, she wasn’t interested in using it. Sigh. When we ordered, I was pleasantly surprised to hear Soup-er Boy ask for the pork belly panini–plain of course, but still! I hoped rather than believed that Soup-er Girl would share the panini with her brother. And indeed, I was right. Not only did she not eat panini but she proceeded to continuously spit out food after voluntarily putting it her mouth! On the verge of losing it and taking her outside for a timeout, I decided to just screw it. I was going to enjoy my food (pork belly panini with the fixin’s, roasted broccoli salad, famous Duckfat fries with truffle ketchup, and powdered-sugar donut holes). Everything was fantastic and I even managed to somewhat ignore the fact that Soup-er Boy wasn’t eating his food either. Oh well. Two steps forward, one step back.

I confess I’m not terribly surprised by their lack of interest in all this foodie stuff but I’m certainly not going to let it keep me from continuing to drag them to try different cuisines and foods. The aspect that does give me pause is the cost. Fine dining does not come cheap and there is a part of me that wonders if I am being wasteful–perhaps they’re simply not ready. But I don’t want to wait so long that their taste buds are no longer malleable. I also want them to appreciate that these eating experiences are a privilege, one that I did not have growing up. So then, how to do I continue to foster a healthy appreciation for interesting, well-prepared food without turning into a chore and a waste for all of us? Ahh. Perhaps I just need to remember the story about the girl who grew up eating only Vietnamese and Chinese food but still turned out to be quite the foodie.