“The best vacation ever”

“This is the best vacation ever.”

Those were the words spoken by Soup-er Boy about our recent trip to Tulum, Mexico. High praise indeed from a well-traveled seven year-old.  This trip marked our family’s first trip south of the border, and I must admit that I’m rather smitten with the Riviera Maya. After a long and cold New England winter, I was expecting great weather and beautiful beaches, but Tulum and the surrounding area gave us so much more–a breathtaking coastline, refreshing food, abundant wildlife, and ancient ruins.

As per our usual travel style, we rented a vacation home on peaceful Tankah Bay, some 10 km north of Tulum.  Villa Zama was simply decorated and had wide folding glass doors that opened up entirely on the ocean side, letting in the sea breeze and allowing Soup-er Girl full access to the outdoors.  Most days, we had the entire bay to ourselves; I think we saw less than 10 people the whole time we were there. When we weren’t out exploring the cenote, Mayan ruins, Tulum pueblo, or the magnificent beaches, we just lazed about in the hammocks, sun bathed on the loungers, explored the reef, or snorkeled a few meters from the house.

The house and Tankah Bay were our little corner of peace and quiet, which was both soothing and oddly discomfiting given the events that took place in Boston during our trip.  Initially, I found it hard to relax and enjoy myself while there was so much turmoil back home.  But the kids were happy, so happy, and it’s hard not to relax when time starts to flow slower and your sleep cycle is in synch with the sun and moon.  So despite the occasional jolt of news from home (and the annoyingly loud birds at precisely 6:00 am), we managed to enjoy our surroundings and found a bit of paradise. 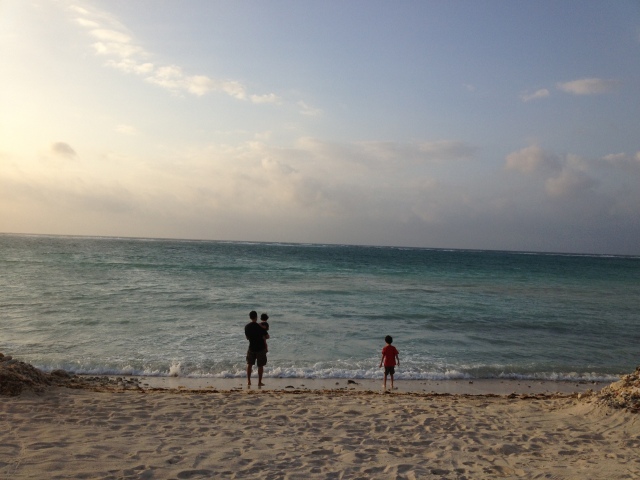 Soup-er Boy, in particular, just blossomed under the hot Mexican sun.  I will always remember this as the trip when he became a big kid.  No longer the little kid who was uneasy in the water, he turned into a fish, snorkeling and diving every day in the bay (protected by the world’s second longest barrier reef) and nearby cenote (freshwater lagoons). We even took him on a tour of the Sian Ka’an biosphere, where he floated down ancient canals in a mangrove forest.  Unlike previous trips, he never complained about eating out and always managed to find something on the menu that he could wrap in a tortilla “sandwich.” He didn’t even complain about having to share a bed with his little sister–I actually think he enjoyed sleeping with her and having time in the morning with just the two of them.  He enjoyed exploring the Mayan ruins in Tulum and Coba, asking our guides questions about Mayan culture and ancient sports. Suddenly so grown up, he was eager to experience new things and it was a joy to watch him mature before my very eyes. I watched him carefully on this trip, gauging his ability to absorb and interact with the new surroundings.  From kicking around a football (aka soccer ball) with the caretaker’s grandson to watching out for his sister and figuring out what to order at a restaurant, he exuded a new sense of self-confidence, which was both delightful and a bit bittersweet.  There were times when I caught a glimpse of the future teenager–his confident gait as he walked with his hands in his pockets looking intently ahead, deep in thought somewhere far away.  My boy… for now.

There is a part of me that believes (or hopes) Soup-er Boy acquired his curiosity about the world from his parents and all the international trips that we’ve taken together: Spain, Bermuda, Vancouver, France, and Portugal.  He might not recall much from those previous trips, but there must be some part of him that remembers the thrill of seeing new people and things, of experiencing something different from the (protected) world he inhabits.  He has recently asked to go to Vietnam, a significant trip (on so many levels) that we currently have penciled in for 2015, when he will be almost ten.  I hope that his curiosity and appreciation for other cultures continues to stay with him as he gets older.  And if we’re lucky, perhaps his sister will follow in his footsteps.

This entry was posted in travel, Uncategorized. Bookmark the permalink.