It’s that time of year again–evening meals outside on the deck with tasty grilled fare and cold drinks.  After a two delicious meals out at some first-rate restaurants–to celebrate Mr. No Nom’s birthday (Sarma) and our 14th wedding anniversary (Journeyman)–I’ve been craving some simple Vietnamese fare.  And a quick trip to the local Asian grocery store provided some inspiration: grilled whole fish, Manila clams, and grilled king oyster mushrooms and Japanese eggplants with scallion oil.  Fish really is best eaten whole, and you should make sure not to overcook it–poor Mr. No Nom had to tend the grill during the penalty shoot out between Greece v. Costa Rica.  Alas, Costa Rica won, but we had a lovely meal.

For the sake of efficiency I would recommend grilling the eggplant/mushrooms first, followed by the fish.  And while the fish is on the grill, start the clams on the stove.

Fish: Rinse fish and pat dry.  Rub fish with small amount (1/2 teaspoon) salt, inside and out.  Using a sharp knife, cut three slits at an angle on each side.  Into each slit, press some ginger and garlic slices. Place the rest of the ginger, garlic, and all the cilantro into the cavity and close. Place fish into a grilling basket and grill over hot coals for 4-5 minutes per side–longer if the fish is thicker. Mix nuoc cham with minced ginger-this will be the dipping sauce for the fish. You can also pour the sauce of the fish.

Clams: In a large clay pot (or heavy pot), heat canola oil until hot, then add garlic and ginger and cook until fragrant, about 2 minutes.  Add clams, followed quickly by nuoc cham and beer (or Chinese cooking wine).  Stir the clams in the mixture and then cook covered for about 5 minutes until clams are fully opened.  Garnish with cilantro and scallions. 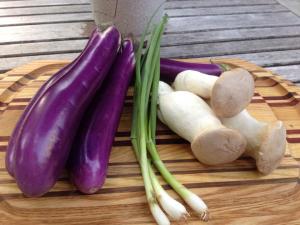 Serve with white jasmine rice and a cold Pinot Grigio–although on this particular night we were lazy and had beer.  Makes a generous dinner for two.