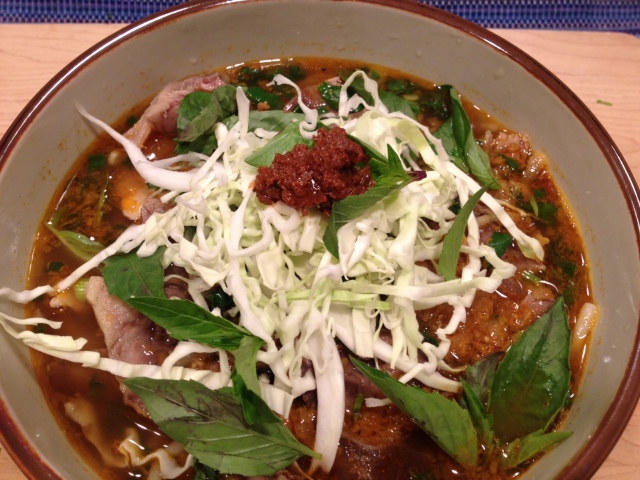 Next to pho bo, there is nothing I love more than a steaming bowl of bun bo hue in the freezing winters of New England.  This self-professed Valley girl has now been living in New England for 18 years–yikes, that’s exactly half my life–and Vietnamese soups, especially bun bo hue was made for these winters!  The pungent, heady broth is seasoned with shrimp paste, lemongrass, shallots, annatto oil, and lots of chili powder and fish sauce (of course).  And the noodles, thicker and rounder than pho noodles, are chewy and substantive, better for standing up to the heady broth.

Traditionally, bun bo hue is often served with slices of pork meat, beef shank, oxtail, pork knuckles and cubes of pork blood.  Given that I am the only one in the family (or commune) who would eat most of that and since it really isn’t possible to buy just a couple of pork blood cubes at the local supermarket, I’ve simplified it to just slices of pork and beef shank. 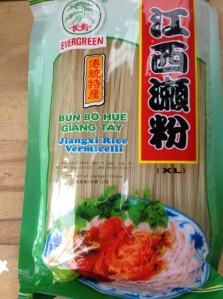 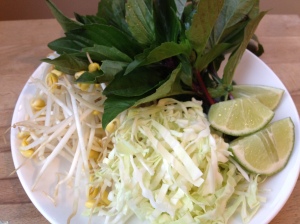 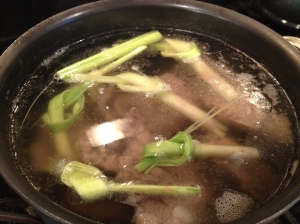 Soup and meat: Bring a large (8-10 quarts) pot of water a boil, add several tablespoons salt.  Blanche pork and beef bones and meat in boiling water for 5 minutes, working in batches as necessary.  Make sure to submerge bones and meat entirely and replenish water as needed.  Rinse bones and meat thoroughly, and place in clean pot of water, making sure that all bones and meat are fully covered. Bring stock pot to slow boil, reduce to simmer.  for at least 5-6 hours (longer is better), skimming any impurities that rise to the top. 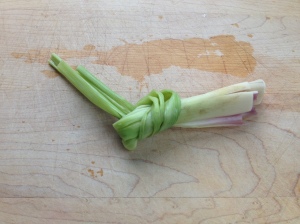 Trim 4 lemongrass stalks, cutting off both ends to leave 8-10 inches, and peeling the outer layer.  Slice each stalk in half lengthwise, bruise slightly with knife handle and tie each half into a knot and add to stock pot.   Add pineapple if using.

After 1-1.5 hours remove the pork meat and submerge immediately in cold water–less cooking time if pork is cut into smaller pieces.  Pork should be firm to touch, like the base of your thumb.  Once cool, discard water and thinly slice meat against the grain and set aside. 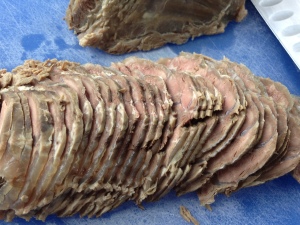 Cook beef shank for about 2 hours or until a chopstick inserts smoothly–again, adjust cooking time as necessary depending on size and cut (cross-cut) of shank.  Remove and submerge in cold water.  Once cool, discard water, thinly slice meat against the grain and set aside.

After 5-6 hours of simmering (feel free to simmer longer if you’d like but the longer the stock simmers, the more I would encourage straining before seasoning), remove and discard bones, lemongrass and pineapple.  Skim off any impurities or pieces of meat/fat that may have fallen off. 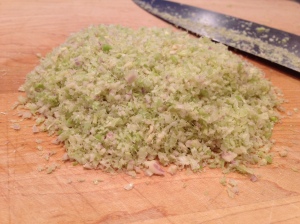 Seasoning paste:  Mince white and pale green parts of 2-3 lemongrass stalks to make ½ cup.  Finely chop one medium yellow onion and two shallots.  Heat oil on medium high heat, add onions and shallots and saute until fragrant (about 30 seconds). Add crushed red pepper (if using) and lemongrass and saute for another minute until onions are soft. Remove from heat and add shrimp paste, sugar, and bun bo hue spices.  Mix well and allow to cool slightly.  Store in airtight jar or container.  Use mixture to season soup stock and as dipping sauce at table. 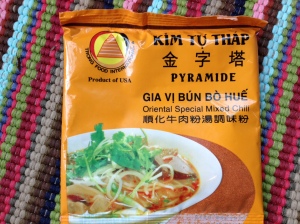 To season soup, add ¼ cup fish sauce and ½ cup seasoning mixture to soup stock, add salt or additional fish sauce to taste.  Soup should taste pungent and spicy.  Soup stock can be left to simmer or on warm if serving immediately or even refrigerated for later use.  Reheat to simmer before using.
Pickled onions: Combine vinegar, sugar, salt and pepper in an airtight container, mix in sliced onions and press into the liquid.  Refrigerate for at least 30 minutes and up to 5 days.  Set out in small individual bowls at serving.

Cooking noodles: Cook noodles in plenty of boiling water (like pasta).  Drain, rinse and set aside. 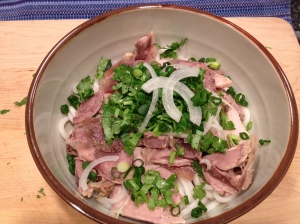 Assembling bowls: Place about 1 ½ cups noodles in large soup bowl (first, warm bowl with some hot water), top with sliced meats, sliced onions, cilantro and sliced green onions.  Sprinkle with a dash of black pepper.  Pour hot soup over everything and serve immediately with pickled onions and a plate of herbs, lime, bean sprouts, and cabbage.